skip to main | skip to sidebar

We are in the final days of our cruise. Bittersweet really. It has been grueling as far as work, but I have made s

ome new friends and been apart of something very special. It's been a long cruise, so we have all gotten to know each other pretty well. It's always difficult leaving a research cruise--there is a build up of excitement to go home, however, life on the boat is simple and vital. These experiences drive me back on land.
The sci

ence on this cruise has been great! Lots of excellent samples (we put a sampler in each day and recovered a good sample each time), that include the LVWS (large volume water sampler), CTD, and sediments. We all these, we have a opportunity to assess 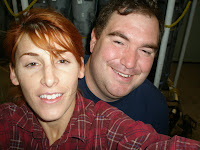 the viral population that is apart of the hydrothermal vent environments, as well as, the bacterial cohort.
I hope all are well. And, I look forward to seeing you all soon.
Posted by Lisa Z. at 8:24 AM 4 comments: 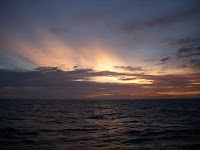 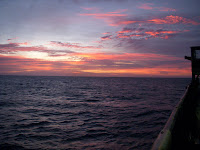 Because we are out on deck recovering and deploying our equipment before the sunrise...we get a good look at the start of every day and the sunrises are amazing!!!! I've never seen anything like it. So, here are a few pics.
Posted by Lisa Z. at 9:08 AM No comments: 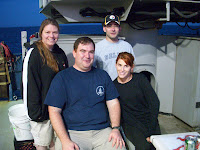 It's been awhile since I've had enough time to sit down and write on the blog. (left is a picture of us at our deck BBQ: Bekki, Doug, Shawn and myself)Things are cranking away out here now, we arrived in Guaymas a couple of days ago and have completed 4 samples so far from various locations in the area. We also started a '

side-project' on the hydrothermal sediments (that are full of oil!!), which began last night...so there is now early mornings and late evenings for me.
All of us on our viral team out here have had a chance to dive! That means we've had a really great time initiating everyone after their dive :). I have a pic of Doug getting doused by Karla Heidelberg and myself with the col 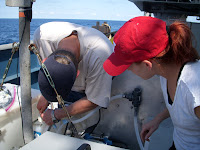 dest water yet. He had been bragging about being able to withstand the pain, however, Karla made a slight comment about there being a third bucket of ice water while we pouring the first two and he almost made a run for it!
Other than that it's been mostly just work work work... I've had a lot of requests for pics so I will try to post some more soon. Hope you all have a great day!! --Before I forget, if you have time--check out the University of Delaware Extreme 2008 website. There have been a lot of additions. I actually was involved briefly in the "call-to-the-deep". :)

We are now being called the 'pit crew'. When one of our samplers comes on board, we have a small window of time to change out certain parts and put the last minute touches on the sampler to be deployed. The deck crew needs to have both samplers in their places well before Alvin's time to dive. I posted a few pics in the earlier post showing what goes on. When we begin it is about 4am, the sampler being recovered usually comes up by 5:45am, then the one being deployed must be over by about 6:45am. As I write this down it seems like there should be plenty of time, however, it goes fast! And, securing the samplers on deck takes a good deal of time.
Posted by Lisa Z. at 9:37 AM No comments: 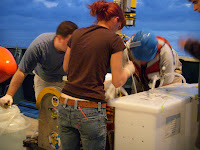 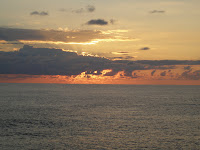 quick picture of a recent sunset. They have been amazing on board, as well as, the sunrises. We have been lucky in starting the day at 3:30am (for me), get to see the moon up for a while and then the sunrise. A green flash was spotted on the sunrise two days ago. Tried to capture a quick picture, but could not get it! :)
Posted by Lisa Z. at 2:35 PM No comments: 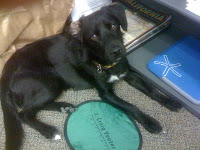 Ok, another big side note. I just got this picture sent to me off Huxley, my puppy back at home. He is adorable! Note the Frisbee by him...JCVI, he got it from the picnic we had while I was away.
Thank you to everyone who is looking after him and visiting him while I am away. :)
I promise pictures from the ocean next!
Posted by Lisa Z. at 2:24 PM 1 comment: